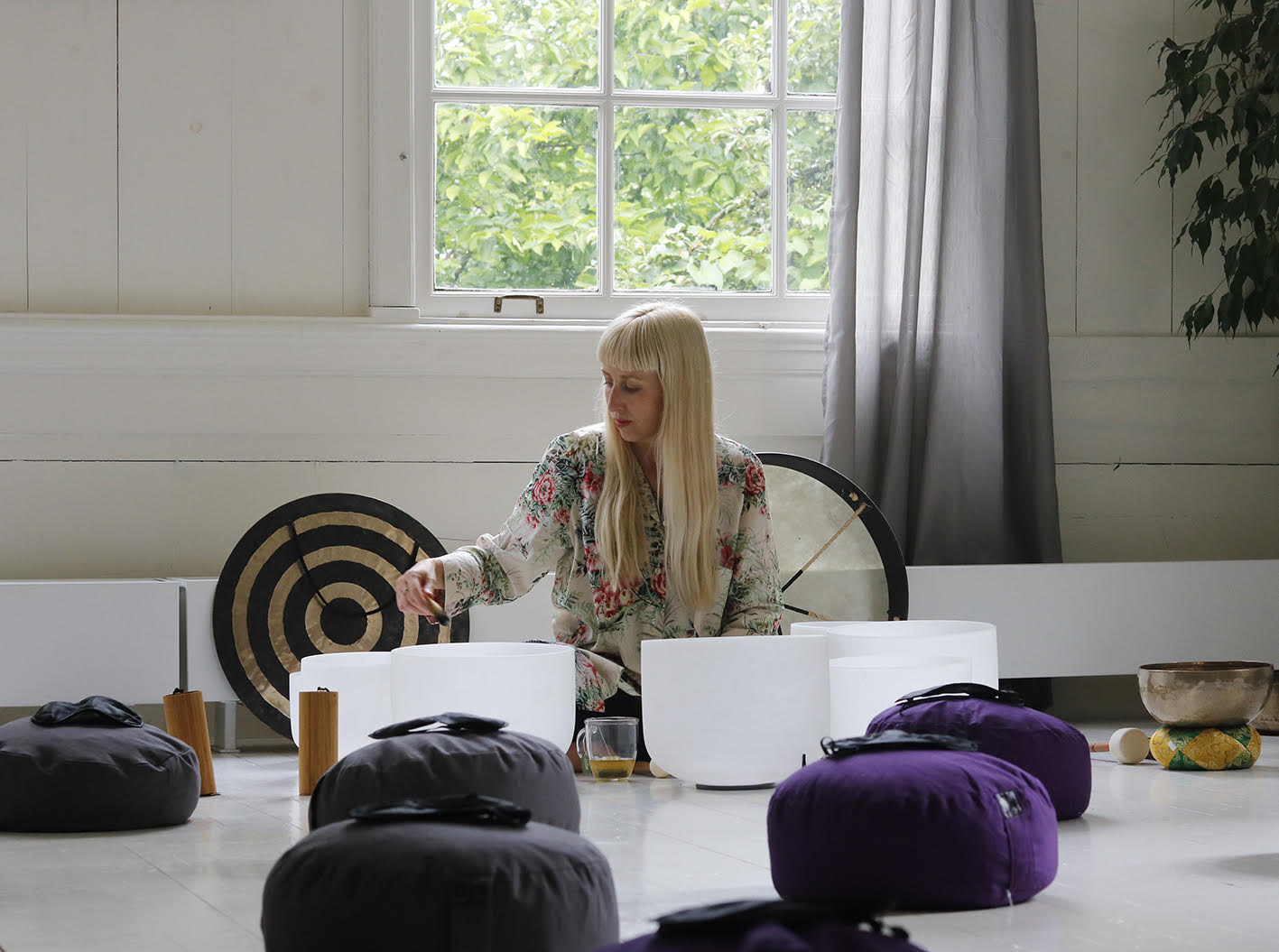 We live in a vibrational universe. Modern science has proven that everything is always in a state of vibration. From the movements of the planets to the beating of our heart, every atom, cell, tissue, organ, and bone in our bodies is vibrating and that vibration produces sound, whether or not the sound is audible to the human ear. And each of these parts of our body are vibrating at a specific rate, that together creates your own resonant frequency. When you’re in a state of health and vitality, you are actually vibrating at a specific rate. When you become stressed, sick, or simply feel out of balance, your frequency changes, literally causing internal and external dis-harmony.

It makes sense then that if we are all vibrating with sound, we can use it to promote health in our lives. Through sound, we can change the rhythms of our brain waves, our heartbeat and our respiration affecting our overall health not just on a physical level, but emotionally and spiritually as well. It’s this effect on our health and wellness using sound to regulate the brain waves that I will focus on in this article.

It’s a relatively new discovery that in fact, our brains are electrical. It was first published in the British Medical Journal in 1875 and nearly 50 years would pass before the first human EEG (electroencephalogram) was recorded.

There are 5 brain wave frequencies and each correlates with a specific state of consciousness. Like sound frequencies, brain waves are measured in Hz, or cycles per second. In general, the slower the frequency of your brain waves, the more relaxed you feel.

Sound therapy/healing is an effective tool to help regulate and control your brain waves for better health, higher performance, and an overall more positive experience of life.

It’s important to note that due to neuroplasticity, we now know that our brains can be re-wired, including by using sound. Neuroplasticity is the brain’s ability to modify, change, and adapt both structure and function throughout life and in response to experience.

Your brain cells generate electricity to communicate with each other and this electrical activity forms patterns called brain waves. They can be measured by electroencephalography (EEG), a non-invasive method of recording electrical activity using sensors on the scalp.

Scientists have found five main patterns of brain waves: alpha, beta, delta, gamma and theta. Each brain wave state corresponds to a different state of awareness as shown below.

Gamma brainwaves are the fastest measurable EEG brainwaves and have been equated to ‘heightened perception’, or a ‘peak mental state’ when there is simultaneous processing of information from different parts of the brain.

Gamma brainwaves have been observed to be much stronger and more regularly observed in very long-term meditators including Buddhist Monks.

Associated state: normal alert consciousness, active thinking, and “doing mode”
For example, active conversation, making decisions, solving a problem, focusing on a task, and learning a new concept. We spend most of our time awake daily in this state and they’re easiest to detect when we’re busy thinking actively.

Associated state: physically and mentally relaxed
They can also often be found during activities such as: yoga, just before falling asleep and when being creative and artistic. During a sound bath, you will shift first into this state before moving into the theta brain wave state. Alpha brain waves are some of the most easily observed and were the first to be discovered. They become detectable when the eyes are closed and the mind is relaxed.

Associated state: creativity, insight, deep meditation, healing, reduced consciousness
This is the state where the magic happens and I’m trying to guide people into during my sound baths. Most frequently, theta brainwaves are strongly detectable when we’re dreaming in our sleep (think, the movie Inception), but they can also be seen during deep meditation and daydreaming.

Associated state: deep, dreamless sleep
These are the slowest of all brainwaves and are strongest when we are enjoying restorative sleep in a dreamless state. This is also the state where healing and rejuvenation are stimulated, which is why it’s so crucial to get enough sleep each night.

An important discovery in the recent history of neuroscience is the significant differences in brainwave characteristics of highly experienced meditators. Expert meditators not only have different resting-state brainwaves from non-meditators – but they also seem able to control their brainwaves through voluntary thought control with greater ease than others.

Sound therapy is an effective method to “re-train” our brainwaves. This can be achieved in person during a sound bath which uses specific instruments, such as quartz crystal singing bowls, gongs or tuning forks, to entrain the brain waves of participants into the theta range. Or can be done using stereo headphones and a specifically created sound recording.

Binaural beats effectively synchronize & entrain your brainwaves to enhance a specific brainwave pattern. The word binaural means “having or relating to two ears”. Brainwave entrainment happens inside the brain and is caused by a physiological response. Upon hearing two tones of different frequencies – sent simultaneously to the left and right ears through headphones, or with certain instruments – the brain perceives a third tone based on the mathematical difference between the two frequencies. The brain then follows along at the new frequency (5 Hz), producing brainwaves at the same rate as Hertz (Hz). The technical term for this process is ‘frequency following response’.

For example: if a 200 Hz sound frequency is sent to the left ear, and a 205 Hz to the right ear, the brain will process those two frequencies and perceive a new frequency at 5 Hz which is in the Theta range.

Ancient cultures have been doing this for thousands of years. Scientist Melinda Maxfield, Ph.D., conducted research on drumbeats used during rituals of ancient cultures and found that they generally beat at a steady rate of 4.5 beats per second. This consistent beat induces a trance-like state for the tribe, due to the brain shifting into a 4.5 beats-per-second brainwave frequency, which is a low theta brain wave state.

Entraining your brain waves can be a highly effective method for personal growth by allowing you to change your state whenever you want.

You can even use Bio or Neurofeedback to try to understand and control your mind and body. According to researchers, with the aid of a machine, you can become aware of your blood pressure and may learn to reduce it. Similarly, if you are shown a real-time EEG (electroencephalograph) that reflects brainwave patterns associated with either attention or relaxation, you may eventually learn to adjust your brainwaves to produce the desired state.

To entrain your brain waves into the theta range, try listening to the below spatial audio meditation created by Stacey and her music group End of Time. 4D Theta Meditation YouTube link Here. Headphones recommended. Close your eyes, breathe in deeply, and let the 4D spatial sound bring you into the theta brainwave state.

Stacey Griffin is a certified sound therapist and meditation teacher based in Amsterdam but originally from Canada. An innovator in the field of sound healing, she’s brought her integrative approach to thousands around the world. From leading conferences and festivals such as SXSW and Wanderlust to corporations such as Calvin Klein & Mercedes, to museums and nightclubs; she believes in the power of sound to heal and transform. Learn more